An antique Victorian mahogany folding bagatelle game board. A fantastic piece of game board history designed to sit on top of a dining table or recreational table.

Only 1 left in stock

An antique Victorian mahogany folding bagatelle game board. A fantastic piece of game board history designed to sit on top of a dining table or recreational table. The bagatelle board is a portable folding model with brass hinges secured with flathead screws. The exterior is mahogany alongside a green cloth interior. The semi-circular end inside features nine holes, one in the middle of the semi-circle and the rest surrounding it evenly in a ring.  The middle hole is the number nine, the others are numbered 1 – 8 in a semi-random order. Six sets of five holes run along either side of the board, originally used to keep score. The base is furthermore covered in green cloth. Additionally a sticker from Barnby Bendall & Co. Cheltenham. Barnby Bendall and Co. Ltd were furniture removers & storage facilitators from 1839-1976 in Cheltenham, England.

Bagatelle was a game, invented in the 18h century, which used metal balls, steel pins and pockets. This board is an early forerunner of modern pinball and a cousin to the Japanese game of pachinko. Early forms of the game used cues instead of the spring loaded shooter found in modern pinball machines. This mechanism was not invented until the mid-19th century.

The origins of Bagatelle are even less clear than most games of a similar history although, since the name is French, the most obvious guess is a French derivation. From 1770 to 1850 Bagatelle was just as popular as Billiards throughout England and Britain. Additionally, Bagatelle was popular enough in the 19th century for one political cartoonist to use Bagatelle as a metaphor for the 1864 Presidential election between Abraham Lincoln and General George B. McClellen. (Pictured Below) 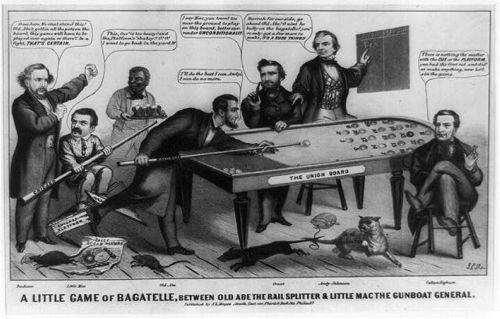 Pre-owned, this bagatelle board is in poor to fair condition, with wear commensurate with age and freqent use. Both the interior and exterior of the board game box have faults. The exterior mahogany is in need of refinishing and there is obvious tarnish, dings and scratches. However, this wear suggests a sense of age as the dings and scratches are dark. Chip missing from right side of box located just above the hinge. Inside, the cloth is also stained and peeling up along the folding line. All the semi circular number cups are present however, there is a small bit of felt missing near the #2 hole. Area with single hole is missing felt from use. The game board is missing the cue, balls and scoring pegs.

Lastly please view all the photographs as they serve as an extension to the description and condition report.